Earlier this year Barbie announced its partnership with Virgin Atlantic to help in their quest to inspire young ladies that they can be anything and help promote the success of women in aviation. Barbie’s first ever career is said to be a model, since then she’s had more than 80 careers! Pushing for a ‘real world’ approach at 60, Barbie continues to adapt to current trends not only in her appearance but also in the brand’s advertising, such as responding to the increased effectiveness of social media. 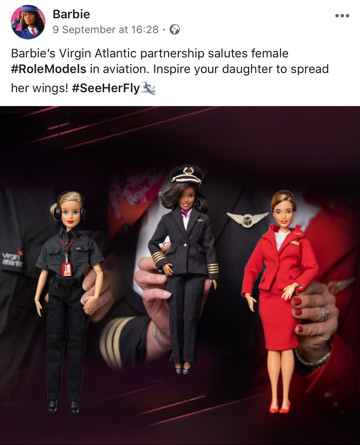 In a recent meeting at Mattel’s headquarters with Baby Brands Direct, it was inspiring to learn about the new dolls lined up for 2020 as well as the motivation behind the development of its first Barbie in a wheelchair. The later was inspired by a young girl writing in to them, in response to the ‘I Can Be Anything’ campaign. She noted that she was in a wheelchair and there wasn’t a doll like her. Barbie then launched the dolls in a wheelchair in both blonde and brunette with both selling out earlier this year. Part of the popularity is that parents are also being educated on the benefits of an inclusive range of dolls of different types for their kids in order to help in their roundness and normality of themselves and those around them. In Spring 2020, the first ever doll with Vitiligo will be launched, inspired by the super model Winnie Harlow. Its hard to believe that is was only in 2016 that Mattel first announced it was introducing 3 new body types – curvy, tall and petite, and that she would come in 7 different skin tones, 22 eye colours and 24 hairstyles. The popularity of the new Ken range of dolls with modern haircuts, body shapes and clothing will also now increase to include a career Ken range.

It is reported that circa 350,000 Barbie dolls were sold in the first year of its launch, today the annual figure on one line is around this! In particular, for 2020 there will be a new ‘experience’ approach to the doll, called ‘reveal’. Kids will be able to purchase a concealed doll, that becomes revealed after immersing it in water within its packaging and shaking it. Additional steps reveal eye colour and other packages within the purchase can be opened for its clothes and accessories.

Barbie is part of a billion pound a year industry and is sold in more than 100 countries, so if you’re not stocking it you really should! The collectors sector for the doll is considerable too and huge brands including Gucci and Versace have collaborated with the brand over the years. For the Brands’ 40th Birthday, Diamond company De Beers even made her a sparkling dress with 160 individual diamonds, said to be worth $50,000! She’s so famous and well loved that she even appears in the Toy Story movie franchise!

The brand will continue to appear in online content, connecting with youngsters through its animated shows. The 3 main characters from the shows will also be available to purchase as individual SKUs (Barbie, Nikki and Daisy) at Baby Brands Direct. To become a stockist of Barbie you will need to first apply for an account here. Account holders can log in and review the range and place orders at trade price. There are also volume discounts available and fun quizzes to test your Barbie knowledge on the brand page (visible once logged in).