Trends and the media can massively influence the interests of mums, dads and their little ones – not to mention parents’ buying choices. Here, at Baby Brands Direct, we feel it is important for retailers to keep up with the latest trends. That’s why we offer brilliant licensed products, that will appeal to fans of recent TV and film releases, as well as timeless classics that are still popular today. Plush toys are always a hit with kids, as they are often seen as a great, comforting companion – both in bed and on the go. With so many great brands to choose from, it can be a little confusing to know which products to stock – so here is a brief run down of some of our popular licensed plush toy lines.

Disney Pixar’s latest film, Inside Out, came out earlier this year – and is the second highest grossing animated film of 2015, not to mention the tenth highest grossing animated film of all time. It was a huge success with fantastic ratings and reviews and the imaginative story of a girl and her emotions has touched the hearts of kids and adults alike. We stock various plush toys of the five emotions, as well as Riley’s imaginary friend, Bing Bong – perfect for kids to play with, or even for nursery staff and parents to teach children about their own emotions. With the UK DVD release date on 23rd November and Christmas just around the corner, now is the perfect time to stock up on Inside Out plush toys!

Paddington Bear is one of those timeless and classic characters that families have loved for decades. However, this furry friend has also had a recent cinema outing, adding a modern twist to this otherwise old fashioned franchise. The comedy film, released in late 2014, saw a CGI animated Paddington act alongside stars such as Julie Walters, Jim Broadbent and Nicole Kidman. The film’s charm and laugh out loud gags made it appealing to today’s children and made sure that Paddington Bear is still in their radars. A cute cuddly teddy bear, in a charming duffle coat and boots, this sweet character will surely be a brilliant bedtime companion for little ones. 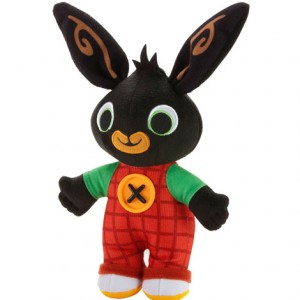 Bing is a relatively recent addition to our range – brought to us by Mattel. This lovable bunny has left quite an impact on the CBeebies audience. Each episode of Bing tells the story of a typical toddler’s life – with all the micro-dramas that happen on a day-to-day basis. These honest storylines are easy for little ones to relate to. With almost 40,000 followers on Facebook, there are definitely a lot of Bingsters in the world – good news for retailers looking to stock this range! Every Bingster wants their own Bing to play with and these cute plush provide them with plenty of opportunities to act out their favourite scenes!

We also have some cute and cuddly superheroes from the very popular Marvel franchise. Great for older kids, these brilliant soft toys present the likenesses of their favourite superheroes – Iron Man, Thor and Spiderman – in an adorable, chunky way. New Marvel films are released every year, so these toys are the perfect stock for those wanting to keep up with current trends.

Other popular and timeless ranges – such as Toy Story, Mickey Mouse Clubhouse and Peter Rabbit – are also available to buy wholesale now! Check out the category page for these great licensed plush toys!