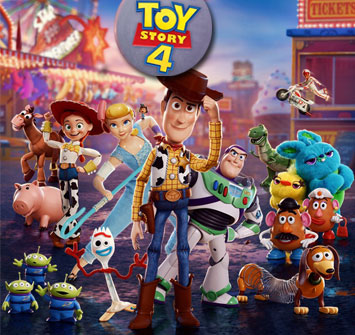 The latest Toy Story sequel is due out in UK cinemas mid-June and is of course expected to be a massive blockbuster hit. Official trailers by Disney Pixar have been released on YouTube with millions of views already, with them stating that, ‘On the road of life there are old friends, new friends, and stories that change you.’

True to that, familiar popular characters including Woody, Buzz Lightyear and Jess appear on screen as well as new characters such as Bunny, Ducky and Forky. A range of movie toys has been released by Mattel recreating the Toy Story 4 characters in posable figures, talking toys, as well as play sets and creative games.

Must have for the summer are the range of character figure toys scaled proportionally to a 7” height and available at 2 price points, with the premium talkers assortment offering having 15+ character phrases. It is important for toy retailers to offer the figures toys as they encourage children to engage in story-telling play, and in this case inspired by the Toy Story movies, kids can create their own adventures for the well-known characters to go on. This helps to encourage dexterity, imagination, communication skills and encourage interaction with family and friends. The assortments are mixed and include a higher ratio of the key characters to be in line with expected sales.

There are also 3 toys sets, one of which includes new character Duke Caboom with his motorcyle. A must have for new fans and collectors, the set include a launcher that sends the set off up 15ft! It also performs stunts including a wheelie, definitely a cool toy and idea for birthday presents and occasions, with a SRP of £24.99. At the same price point is the classic Woody with Bullseye also making a great gift duo, with Woody able to sit on Bullseye for riding adventures. The highest sales we have seen historically is for the character Buzz Lightyear and he comes as a solo at a SRP of £34.99, with all the phrases, sounds and actions kids will go ecstatic over.

New under licence within the Fisher-Price Little People range is a figure pack containing 7 of the key characters – including the new characters of the 2019 Toy Story 4 movie. There is also an Adventures RV camper that opens up into a full playset and comes with Buzz and Jessie and makes for a great way for younger fans to be included in movie related play.

For Hot Wheels fans and collectors, there is the must have Toy Story 4 movie vehicles. Crafted with such thought, each car is easily related to the character movie. This is great for kids would want everything available in their favourite character and open them up to different forms of play that they may like to expand on with additional characters.

The top playset by Mattel that retailers can obtain supply of in this licence is the ‘Toy Story 4 Carnival Spiral Speedway’ game. Suitable from 2years, the set comes with iconic Woody in a car and also new characters Bunny and Ducky together in their car, that can be sent spirally through the playset again and again in a thrilling race against each other.

Obtain trade supply for your store of toys in the evergreen and ever growing Disney movie licence Toy Story, from leading manufacturer Mattel, at Baby Brands Direct.

Catch a glimpse of the new movie through the trailer below:

For trade access log in here to view prices, pack sizes and place orders, or to apply for an account please submit the online application form here.