The Take That star will write the theme tune and sing the theme tune for the brand-new animated pre-school series The Adventures of Paddington, debuting March 2020 on Nick Jr. 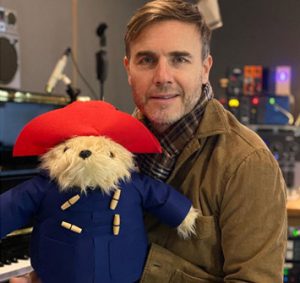 Celebrity Gary Barlow’s new song, titled Paddington Bear,  will play during each episode of the all-new CG-animated series, coming to screens next year on Nick Jr. His tweet about it already has over 19,500 likes and 620 comments! Image shown here from his social media account posing with Paddington (RBD-TOY25).

Airing in March 2020, The Adventures of Paddington centers on a younger Paddington as he writes letters to Aunt Lucy celebrating the new things he has discovered through the day’s exciting activities.

Following the series premiere of The Adventures of Paddington, NickJr.co.uk and the Nick Jr. App will feature special Paddington short-form content, activities and games, with the full-length episode premiering on these services a week before TV.

The Adventures of Paddington is directed by Adam Shaw and Chris Drew of Blue Zoo (Go Jetters, Digby Dragon, Miffy, Q Pootle 5), and developed for television and written by Jon Foster and James Lamont (The Amazing World of Gumball, Cuckoo, Paddington 1 & 2). The series is a Heyday Films and StudioCanal production, in association with Copyrights.

Exciting times not just for children but retailers too, with interest in the licence likely to be reinvigorated! Wholesaler Baby Brands Direct has a range of Paddington bear toys ranging from rattle to plush bears. Register or log in to review the range and start stocking.