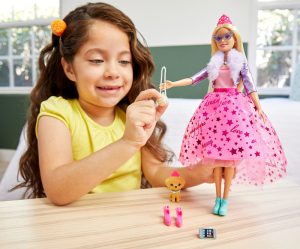 Happy birthday Barbie! The most famous doll in the world first made her debut on March 9th 1959, making her 62 years old this week! From humble beginnings at the American International Toy Fair in New York, to her current status as a global icon, Barbie has changed a lot over the years. Barbie’s creator, Ruth Handler, wanted to show girls that they had choices and could be anything they wanted to be and, decades later, Barbie is still on a mission to inspire young girls and allow them to dream big.

Barbie appeared in her first commercial in America on the Mickey Mouse Club programme in 1959. Following the advert, the dolls flew off the shelves, with 350,000 sold in the first year! In 1968, Barbie released Christie, one of the first Black dolls on the market, in support of the Civil Rights movement. In 1992, Barbie began running for President and has run in every campaign since then! In 2001, her first feature length film, Barbie in the Nutcracker, was released, opening doors for the franchise to create new films and series. Later in 2018, Barbie became even more aware of her influence on young girls, creating the #MoreRoleModels campaign and launching the Dream Gap Project that offers girls around the world resources and support to achieve their dreams.

Baby Brands Direct have a great range of Barbie dolls and playsets in stock now, available to buy wholesale. In honour of Barbie’s birthday, we’re currently offering 15% off selected items in the range. This includes the Barbie Princess Adventure Barbie – which features accessories including a pet puppy, pink tiara, pair of platform sandals and smart phone – and the Barbie Doggie Day-Care Playset which is a fun set that allows kids to act as carer for adorable puppies! Check out the promotions page for the full range of Barbie products on offer!