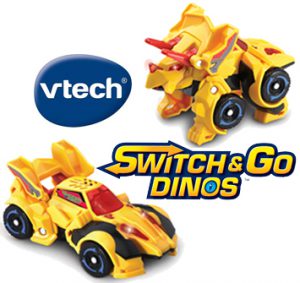 The Switch & Go Dinos range from Vtech has arrived in stock this week at Baby Brands Direct! The T.V. advertised line of Dinosuars that transform into vehicles or helicopters are available for supply in 7 models at trade price. The transformation fun of the toy can be achieved in a few simple steps and encourages gross motor skill development, memory and of course imagination. The toys each have a button which activates the sounds of the dinosaur roaring and also includes dinosaur facts. Sounds affects are also triggered in line with which mode they are in, as kids push them along as well as when switching. The toys all have LED screens too which display animated drivers or the dragon’s eyes. These toys are packed with value at a reasonable SRP of £9.99. They even come with educational flash cards that impart knowledge in a fun and subtle way about the dinosaur. Suitable from 3 to 8 years there’s a large market share that is applicable to the toys too. The new A/W 2019 toy models released by Vtech and available in the range include: Slam the Stegosaurus, Claw the T-Rex, Clash the Triceratops, Soar the Pteranodon, Siren the Therizinosaurus, Thunder the Spinosaurus, Blister the Velociraptor. 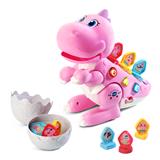 This season’s new launches from Vtech also include a selection of baby to toddler toys including the Dancing Dino that’s being T.V. advertised and available in both green and pink. Suitable from 2 years, the toy in a way introduces programming, having 9 action plates that customise the dino’s voice, emotions and dancing styles. Up to 3 actions plates can be placed into his back at a time, helping to create unique combinations, it also comes with a Dino egg to sort the plates when not in use. As you would expect from Vtech this toy offers 30+ sing along songs and melodies as well as 3 light up buttons that teach colours, shapes and music. 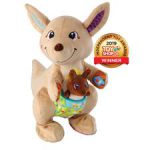 Another hero new toy is the Hop A Roo Kangeroo, that hops along the floor encouraging little ones to follow after it. The Vtech toy also comes with an adorable baby kangaroo that can be safely kept in the Mummy’s pouch. The Mummy toy identifies when Joey is place inside and also interacts with it outside of the pouch. There’s even a light up heart that provides nurturing responses as well as the cute phrases, kissing button and pouch button! There are 2 buttons on the kangaroo`s paws that introduce fun facts, numbers, phrases and sounds. Even more than this the Vtech Kangeroo toy has sing-along songs that encourage little ones to join in with a stop and start game. 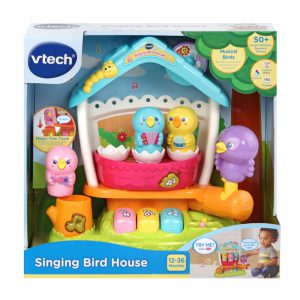 The colourful, smiling, pull along Ladybird is a must have for toy shops this season. It has shape sorting pieces to engage and refine motor skills, which can be repeated when they are popped out by pressing the small bug on the top, which in turn helps teach cause and effect. There’s sliding, manipulative play opportunities on both its sides, as well as light up buttons with melodies, sing alongs and lots of educational content including objects in nature. For a similar age group of 12 months plus, retailers should also consider the Vtech Singing Bird House, which has 3 musical instruments to discover alongside sounds, colours and numbers. A stand out feature of this product is that when the 3 musical birds are placed in the tree consecutively they harmonise with each other. Each bird plays an instrument and also imparts facts about that instrument. In this age range of 12-36 months, retailers can also stock the Tool Box, this has 3 character tools, that encourages role play alongside the 15 melodies and 4 sing along songs it offers. To catch the eye of the many dog lovers in this age group, retailers should offer the Wiggle Pup! Moving in a circle it keeps baby visual amused and active, it also has tricks, sounds, melodies and sing alongs! 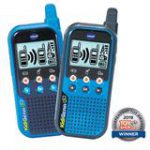 For many of us, Walkie Talkies will certainly bring back fond memories. The hide and seek, running about, and imaginative play remains a thrilling part of childhood, and Vtech’s new release with 650ft range is a great example of enabling this and has already been awarded a winner by the Toy Shop. The toy has a child safe, 2 way talk feature with secure digital connection. There are also fun voice effects that they can use for even more fun role play character adaptations as well a choice of screen animations they can send each other and 4 games they play together. 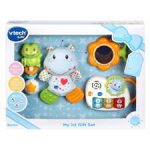 With Christmas gifting season upon us, pre-boxed sets are always welcome. The Vtech My 1st Gift set is perfect for such occasions as well as Birthdays etc and comes in a pink and blue version. The 4 piece set contains a musical piano, hippo teether toy, rattle and mirror, together introducing animals, numbers, colours, as well as 15 melodies, sing along songs and fun sound effects.

Vtech is a leading toy brand, it offers retailers great support through T.V. advertising and well-priced toys that are packed with value adding features. Baby Brands Direct is an award-winning distributor and wholesaler of baby, nursery and toy brands including Vtech to the independent sector with stores ranging from gift to pharmacy. Login here to place orders or register here to apply for an account.