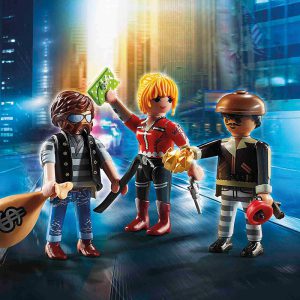 New research by Playmobil found that close to 3 in 4 scientists saw traditional toys as best for boosting children’s creativity and imagination. Playmobil is a successful brand of toys with a proven sales history and market share statistics of over 40 years. Developed in the mid-1970s, the toys were designed to fit into a child’s hand and be the right balance of firmness and flexibility to allow for creative play. A great selection of Playmobil figures and playsets are available to buy wholesale at Baby Brands Direct.

Play is recognised by scientists the world over as crucial to healthy brain development and to teaching children how to engage and interact in the world around them. When talking about play, it is important to distinguish between passive entertainment and active play. While passive entertainment doesn’t push the child to use their brains, active play allows children to use their creativity to develop their imagination, dexterity, and physical and cognitive skills.

It’s no surprise then that the new research by Playmobil found that close to 3 in 4 saw traditional toys as best for boosting children’s creativity and imagination, while over half said they improved problem-solving skills (56%), understanding of the world (54%), as well as their fine motor skills, coordination and concentration (53%). Despite the reaction to traditional toys being overwhelming positive, over half of respondents (51%) thought that children don’t play with toys as much as they used to.

When it comes to digital toys, many Brits say they simply aren’t up to scratch, with many saying that they even teach unhealthy habits. In fact, when asked how modern toys affect children, almost half (41%) said that they only sought to distract them rather than encourage healthy and beneficial play, and more than a third that they teach addictive behaviours. 1 in 10 even suggested that they were outright bad for children. As a result, the average time a parent would let their child play with a digital toy is half that of a traditional one.

The research also found that traditional toys still hold a special place in our hearts with half of us (44%) admitting that we still feel nostalgic for our childhood toys, and more than 1 in 10 still hanging on to our favourite childhood toys even now. What’s more, despite all that technology has to offer these days, a third (33%) believe that toys were better when they were a child, and 78% that traditional toys still hold their own, even today.

For a great range of traditional toys – such as figures and playsets or wooden toys, check out Baby Brands Direct, a leading UK based wholesaler of nursery and baby goods.